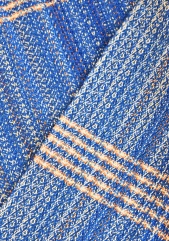 I stand at the ironing board, ready to press over the hem on the towel. I look more closely, flip the fabric over, flip it back. I pause, indecisive; which side is the “right” side?

Many weaves look distinctly different on one side from the other. Summer and Winter is a perfect example. One side is predominantly light and the other predominantly dark; that’s where it gets its name. Twills can have the same effect depending on the float lengths and colors of the warp and weft.

I weave a lot of twills and when the fabric is on the loom, I get used to the face on top. When the warp advances around the cloth beam to where I can see

the other side, it’s can be a delightful surprise. Sometimes I can’t decide which side I like better. Do I want the accent motif to stand out on a uniform background, or is the background itself the star of the show?

As the weaver, it’s really up to me to choose which is the “right” side. Some weaves are pretty much the same on either side. Plain weave is – well, plain. Lace weaves will be opposite but still lace weaves—a weft float on the front will be a warp float on the back. It just depends on what you are looking for.

There comes a moment, though, when I have to decide—which is the front side and which is the back side. Hems have to go somewhere.

I pick up the iron, press, and pin. Decision made. At least until I sit down to sew the hem and have second thoughts.