One of my former weaving teachers, Madelyn Van der Hoogt, used to say there are two kinds of weavers: color/texture weavers and structure/pattern weavers.

The color/texture people are drawn to – well, color and texture. Their projects bump and bubble with shades and hues, delighting the eyes with a virtual flower garden on the loom.

The structure/pattern weavers gravitate towards those intricate interlacements that take the yarn in elaborate diamonds and laces. How do you get the strict grid on the loom to softly curve in the design?

Like all generalizations, these show opposite ends of the weaving spectrum. Most of us fall somewhere in between the extremes, but may drift toward one end or the other. At one point in a guild meeting, we were discussing this and a friend told me “Oh you’re definitely structure/pattern!”

Hmmm. I hadn’t thought of myself as being so far to that end. But as I scrolled through my weaving pictures, it’s obvious. While I do dabble in color blending and like a bit of texture in my towels, those fancy diamonds and stars show up over and over again.

The lemon napkins with a green twill border.

A similar pattern shows up in some red and blue towels. 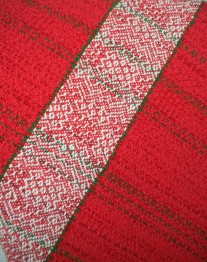 There are the double weave placemats with repeating blocks and ovals. 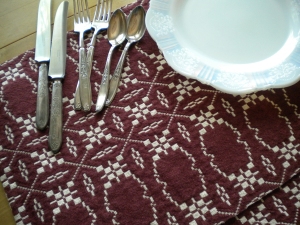 And then there are the small table cloths sporting diamonds, stars, and blocks overall. 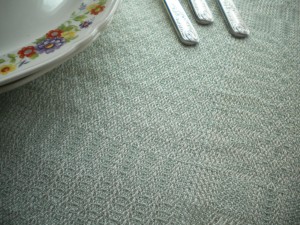 Right now I have a towel warp on the small loom and my mind wanders while I’m throwing the shuttle.  What can I put on the drawloom that will be more than an exercise in sampling? How can I adapt the elaborate fancy twills from the 18th century Snavely manuscript into something delightful for the 21st century? Is there room in our clear-the-clutter culture for decorative textiles?

So my mind wanders. I think a point twill on the 12-shaft loom is beginning to take shape.