Many years ago, I heard a well-known weaver speaking at a conference. He joked that whenever he wanted to change threadings, he just went out and bought another loom. At least I thought he was joking and all us in the audience laughed with him. But now I wonder if, indeed, he was just being honest.

You see one of the most time-consuming tasks of weaving is threading the loom. Each thread has to go through a heddle and a dent (a slot) in the reed (the beater). Patterns weaves like damask and double go through two heddles and the reed. Some warps have hundreds of threads. So for that conference speaker, it was more cost-effective to buy another loom than to keep rethreading every time he needed to change patterns. I don’t think I can make the same argument.

One alternative is to put on very long warps. For me, “very long” is defined as 20 yards. One of my friends routinely puts on 21 yards. Some weavers put on 50 or more yards. The longer the warp, the more fabric you can weave before you have to re-thread.  But what if I get bored with the pattern after 10 yards and there are 20 more to go? What if I get an order for something that needs that width, but there are 20 more yards to weave before I can change warps? 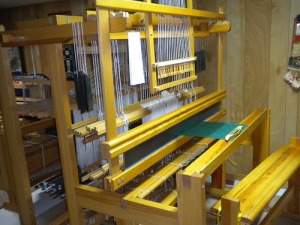 Earlier weavers had a solution for this. Their looms had pieces that could be interchanged. There are references in their records to “gears” which controlled the pattern. When they needed to weave an overshot coverlet, they put that “gear” into the loom frame and tied on a new warp. If they needed to weave dimity, they stalled that “gear.” So it sounds like they had a limited number of loom frames and multiple “gears” to weave the various patterns they offered.

I’ve tried to imagine what these gears were. I have an antique Newcomb loom which has a cast-iron device that changes the shed and advances the warp every time the beater is pulled. Is this what they are talking about? If so, it would be pretty heavy to change out when a new order came in. Or are they referring to the actual shafts with heddles? I can see bundling my threaded shafts and carefully rolling them up to preserve a threading, but it would work better if I kept the threads in the reed and bundled the reed with the shafts. That requires extra reeds.

All this discussion is really an attempt on my part to fend off “loom envy.” For the past year, I’ve vacillated about getting another loom. I’ve pretty much decided that it’s not necessary, but there are times when I really could use another wide loom. A girl can dream!