My left hand doesn’t know what my right hand is doing. Seriously. My right hand can do things my left hand can’t even pretend to do. I know this is common, but my directional challenges became very clear during my on-going exploration of unfamiliar weaving skills.

Some techniques are very directional. To make a ridge slant right or left, the yarn has to follow the right path. How I pull it around a warp thread can change the slant of the knot.

Soumak is one of those methods. Soumak is a decorative, hand-manipulated technique often used in rugs but I’ve heard of it used in wall hangings and other textiles as well. It goes way back in textile history and shows up with many forms.

There are two wefts in soumak: the soumak weft and the ground weft. The soumak weft wraps and crosses the warp but is mostly decorative, thus the need for a ground weft for stability. Peter Collingwood presents several variations of soumak in his book The Techniques of Rug Weaving.

I wanted to try my hand at double soumak which makes a nice, thick ridge and, if worked in more than one row, will form horizontal v’s.

Going right to left went smoothly: forward over two warps, back under the 2nd one and then over the 1st one and snug it down, a figure-8. The row progressed well. Right up to the turn at the left edge, where I had to move the yarn up and start working left to right. 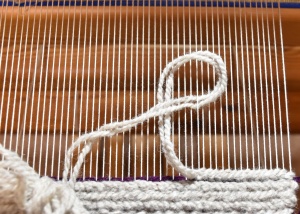 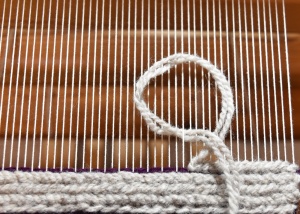 For the life of me, I could not flip the technique to move left to right. My wraps kept going in the wrong direction, which was apparent when the v’s didn’t form. Time to walk away from the loom, and think about what my hands were doing.

Forward over two warps, back under the 2nd one, then up over and around the 1st one, crossing the 2nd one, a left-handed figure-8. Repeat. Take mistake out, try again. Repeat. It only works if the hand follows what the mind is telling it to do. 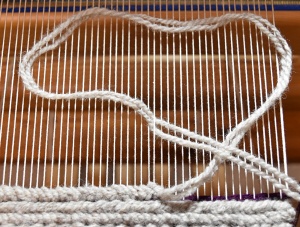 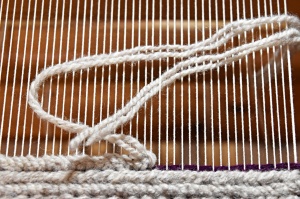 It’s taking some practice and concentration, but the left hand is starting to catch on.